This section tells you about the CAP. What is it and what is it not? Why was it developed? What makes it novel? What research has been done about the CAP? How can it be used and for whom?

The CAP draws upon developmental psychology concepts, such as Vygotsky’s Zone of Proximal Development and Luria’s model of mental processes, as well as the work of Feuerstein and Lidz in the field of Dynamic Assessment. The theories have been operationalised in the CAP to produce a consultation/observation framework. This has enabled the benefits of dynamic assessment models, to be embedded within a consultation/ observation framework for use by psychologists, teachers and therapists etc, to analyse the components of curriculum tasks and a learner’s approach to tasks and other activities, without necessarily requiring individual assessment.

If you have just read the previous section of this article about DA, or perhaps from your own experience, you will be aware that would- be and active DA users face a number of challenges.

In 1998/9 I conducted a survey across EP services in the UK to ask about knowledge and use of DA. By that date, I had taught DA courses in quite a few settings and anecdotally had the impression that despite recognition of its potential benefits there were a number of barriers, making it difficult to effectively use DA in practice. This was confirmed in the survey (Deutsch and Reynolds, 2000) and I can summarise my findings in one short phrase – high interest, low usage. This got me thinking about how to enable useful DA concepts to be more accessible to psychologists, teachers and others and enter mainstream classroom practice without necessarily having to go the DA route.

In EP practice, consultation was becoming increasingly popular, so I decided to develop the CAP. CAP is a consultation framework to be used with teachers, parents, therapists and the learner him/herself, to identify patterns of cognitive strengths and difficulties and then jointly plan, intervene and systematically monitor progress. The stages of development and early trials that the CAP went through before publication at the end of 2009, are documented in Deutsch and Mohammed (2008) and in one of the chapters of the CAP manual.

CAP has a number of novel features:

This might be the first time that DA concepts, usually delivered in direct testing, have been selected and incorporated into a consultation, solution focussed framework.

The CAP uses consultation in a specific and structured way and enables scoring of the learner’s functioning by agreement of all those who work with the child, leading to a detailed profile of the learner’s cognitive abilities. Joint discussion and joint negotiations for each cognitive ability is carried out by a process of triangulation, a well- known technique used in inter-rater reliability studies. The CAP has seven domains, each describing specific cognitive processes associated with that domain of functioning.

Alexander Luria (1980) developed his concepts through his clinical studies of adult patients with brain syndromes and injuries. The CAP may be the first time Luria concepts are being used within a consultation framework. Luria’s neuropsychological model has been adapted for use in some well- known educational psychology tests, such as the Cognitive Assessment System (CAS) and the PASS theory was based on Luria’s work (Das, Naglieri & Kirby, 1994).  The NEPSY (Korkman et al. 2007) has adapted Luria’s concepts for neuropsychological testing of children and in part, so has the Kaufman ABC (Kaufman et.al, 2004).  In the DA field, Lidz’s Curriculum Based Dynamic assessment (CBDA) uses a similar, Luria- based domain structure (Haywood and Lidz, 2007).

Another novel aspect of the CAP, is the CAP Rating Scale, which is a Likert- type scale based on Vygostky’s concept of the ZPD. It may be the first time that the ZPD has been adapted into a rating scale of this kind. Thus the way in which cognitive abilities are scored in the CAP and are re-scored over time, is quite different from the kind of scoring found in most psychometric educational tests.

The CAP has adapted a concept derived from Feuerstein’s LPAD, known as the Cognitive Map (Feuerstein et al. 1995), influenced by Guttman’s Facet theory (1959 ) to create a structure for task analysis (CAP section C). The CAP has a scoring rubric for task analysis (if the CAP user chooses to observe the learner) in or out of a classroom. The results are combined with the learner’s scores to construct the Profile. S-M-A-R-T targets are used as goals for cognitive intervention and are systematically re-rated over time. Thus, in systematic scoring and re- scoring, the CAP aims to achieve good standards of interrater-reliability over time.

The CAP uses a framework of structured consultation between all those involved with the learner, (child, adolescent or adult) to discuss and rate some important cognitive abilities by those who work with or best know the learner, on an ongoing basis.

The ‘team’ consultation is facilitated by the person who leads the CAP consultation, likely to be a psychologist, therapist, trained specialist teacher etc.

Because the CAP is not an age- normed psychometric test, it can be used for a learner of any age. For example, in England and Wales, Educational Psychologists have responsibility for young adults beyond their school years, 18- 25 years. For this group the CAP can play a useful role in ecologically valid assessment of functioning across different settings. As with DA, cognitive abilities can be assessed and targeted at any age from early years on, the CAP has no upper age limit.

Deutsch (2017) examined aspects of validity, reliability and educational use of the CAP using Educational Psychologists from three UK EP services and their schools. Two of the services had brief training and used the CAP with teachers in local schools and the third service functioned as the control group. Details of the research can be found here. Interrater reliability (IRR) of the Luria based domain items and IRR scores between teachers and psychologists were good or very good, showing clear understanding of the CAP items, despite minimal training.

Findings by psychologists in the research groups on usefulness of the CAP in practice, emphasised the need for teachers to be on board; the importance of training for teachers in understanding cognitive processes and metacognition in the classroom and its application within curricular teaching. The CAP users raised important wider issues of the need for support in implementing novel approaches, and how these can be managed given time constraints for psychologists and teachers everywhere.

This was a small-scale study, 28 EPs and 49 pupils over a two- year span of investigation and many participating primary schools.

It is hoped that readers and CAP users who are research oriented may want to carry out their own lines of research and choose to take these efforts further and share their findings.

Yes. The CAP is designed to be flexible in use and to complement other forms of assessment. It is not designed to be used as a stand-alone tool for diagnosis, but can contribute evidence leading to clinical diagnoses.

The CAP is designed to add to your range of tools and skills as a professional. When deciding how to conduct an assessment, you make decisions about what processes and tools to use in each situation. The CAP can be used alone or combined with evidence from tests or other forms of assessment. There may be situations where the information you get from the CAP is sufficient to address the problems and issues which are being presented to you. There may be other times when either you or someone else has already conducted testing or that you decide that some additional direct work with the learner would helpful.

Again, the watchword is reflective practice and flexibility, thus ensuring the relevance and validity of the methods being used.

More than one person – more than one role. The CAP supports teachers, parents, therapists, learning-support assistants (LSA’s), caregivers, etc. The end client of course is the child, adolescent or adult for whom the CAP is being used.

Das,J. P. Naglieri, J. A. and Kirby J. R. (1994b). Assessment of cognitive processes. The PASS theory of Intelligence. Allyn and Bacon, USA.

Guttman,L. (1959) Introduction to facet design and analysis. In Proceedings of the Fifteenth International Congress of Psychology, Brussels—1957. (pp. 130-132). Amsterdam.

A Word of Appreciation

In 2003, when I was looking to begin trials of an early version of the CAP, I approached a number of psychologists and specialist teachers working in different settings. Their experiences and feedback helped shape changes to the CAP. Michelle Mohammed an Educational Psychologist, trained in DA, who was working at that time in an Educational Psychology service, joined me and helped me conduct early trials of the CAP and then continued to work with me over several years, to write the CAP, until publication at the end of 2009. From 2013, for health reasons, Michelle was no longer able to participate in the ongoing teaching and development of the CAP. I want to place on record my sincere thanks to her, for her valuable contribution in helping me bring the CAP from concept to reality. 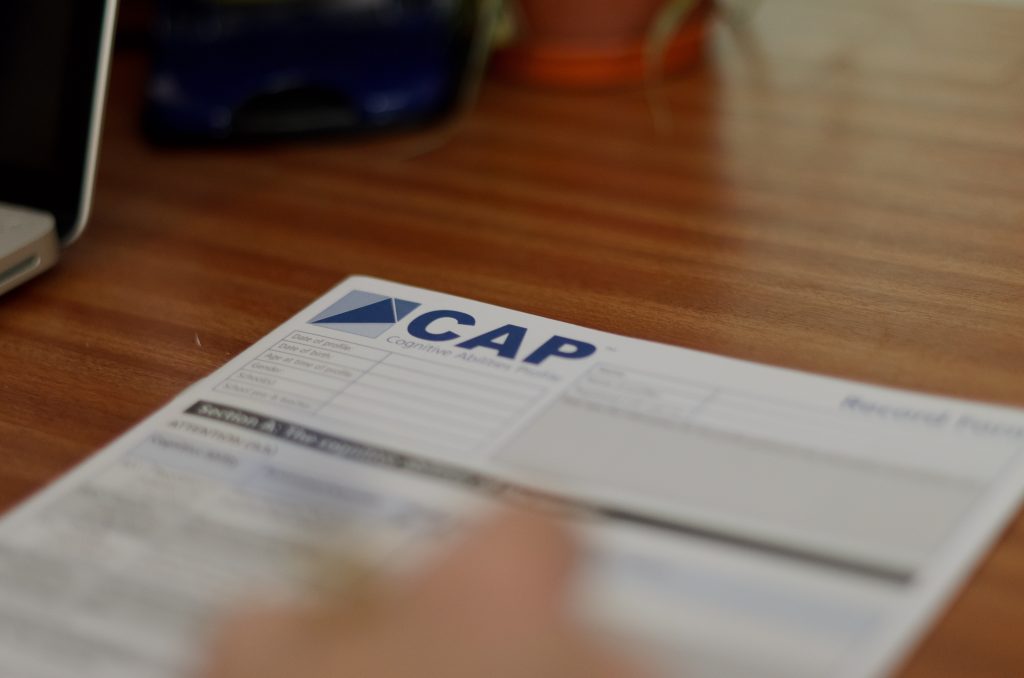